My Big Brother Got Married 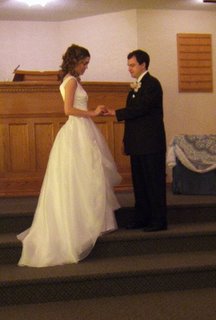 ( I "borrowed" this picture from Emily, Thank you!)


Well, my big brother got married. I figured that I should write about it, just because I want to. First I have to say, Laura made her dress. I KNOW she looks AMAZING! Well, the day went by well. Rehearsal was entertaining. I was not singing well. But I thought it was nerves. (it was Tonsilities though!) Anyway but everything was going smooth, and the church looked beautiful.

The wedding eve, Henry and I drove back from Neerlandia by ourselves. It was an increadably special time that I will never forget. I think the memory of that night will forever stick in my head and my heart.

The day brought nerves, but Henry was pretty calm in the morning. (before breakfast) And then I did not see him till he was dressed at the church. On the way there, mom and I had some quality time together which was nice. We practised singing and just were able to be together. The wedding was beautiful. I almost cried when Henry looked at me before Laura walked down the isle. He just looked so happy and ready to get married. So excited. And then I almost cried when I saw her. Waves of "Oh wow! she looks beautiful, and I am going to have a sister soon." hit my head. So then I cried when they said their vows. Only because it was so beautiful and I could once again see the love that my brother has for Laura and the love she has for him.

I then had to go up and sing. After hearing myself on tape I believe I did an okay job. I sure choked out the first verse though. (Yep I was crying) But it went well. Henry and Laura were married.

The reception was fun. My father and i did a wonderful skit about computers and had everyone laughing. Ashley and I took the "hole in the bucket" song and changed it to "theres a bug in my softwear" That was fun. And then I said a little something. NOw that was hard. I dont know how many have actually gone out and said something at a brother or sisters wedding. (or even someone you are close too) But its hard. It was good. Once again by the end of it there were tears (but not just from me!)

Family pictures was fun. I think at that time I was starting to feel the fact that I was sick. (without telling anyone... thats what happens when you dont want to get sick, you go in denial!) And also just emotional. But it was good.

Then when Henry and Laura came to say goodbye, once again I just saw the love in their eyes. And I know that this is not a love that can be created by man alone. But by GOD. I thank God for the fact that Laura and Henry are so in love, and I pray that they will always grow more and more in Christ and that their love stays the same always!
Posted by Alyson Sunny at 8:21 PM

It is hard to say stuff at a siblings wedding...at least it was at Chris'! I cried as soon as he started crying...i was doing fine up til that point.

Also the fact that you were excited and looking forward to your brother's wedding gave you an adrenaline rush. But, when everything started to slow down, your body reminded you that you were worn down and sick.

Take care of yourself.